It’s been a busy year at the Southern Beaches Community Garden here in Tugun with the Annual General Meeting held on 23 November, 2019 at the garden clubhouse a testimony to this.

With Division 14 Local Councillor Gail O’Neill and Director of the Tugun Community Bank Board, Bob Marshall in attendance, out-going SBCG President Di Gunther was able to highlight an extensive list of achievements and general progress over the past year.

Of course, it being the AGM, the ratification of new committee members (including filling the newly created position of Community Engagement Officer) was at the top of the day’s to do list.

As such, the current SBCG committee members are as follows:

That accomplished, out-going President Di Gunther detailed a lengthy list of activities, developments and general accomplishments experienced by the garden over the past twelve months.

In regards to the garden grounds itself, one of the biggest developments this year was the result of an extra ordinary meeting held on 25/2/19 to discuss water supply issues. The consensus would be that the majority of SBCG gardeners want both rainwater collection and irrigated town water provided. This motion agreed upon, along with the continued support from Councillor Gail O’Neill on the matter, thus suggests the eventual expansion of garden beds is no longer an issue of ‘if’ but only of ‘when’.

Additionally, the SBCG continued in its ongoing endeavour of sharing sustainable and environmentally friendly gardening ideas and knowledge via free workshops in and around Southeast Queensland. Some of these included providing seedlings and potting workshops to:

And a Hugelkulter and Wicking Bed workshop was put on for University of the Third Age and other community members by Mel Strange and Fran James.

As the above listed examples suggest, the SBCG and its 125 members were busy. And the best part…it’s only a small snapshot of EVERYTHING that was undertaken and accomplished. For the complete list, feel free to go to our website contact form and request a copy of the President Report be emailed to you.

Look it over and it’s a very safe bet you’ll be quite impressed with all this little garden club involves itself with and accomplished over the past 12 months.

In doing so, you will, no doubt, be equally impressed with the generosity of the grant providing benefactors that have provided so much of the resources to help the SBCG accomplish so much of what it has.

First and foremost on that list being the  Bendigo’s Tugun Community Bank.  Since day one, this group has backed the SBCG with this year’s grant donation of $4,200 for a new trailer bringing their total donations to the SBCG to nearly $30,000. It’s an impressive amount of money and we at the SBCG cannot say thank you enough for such steadfast generosity.

Additionally, the Gold Coast Airport awarded us just of $500 which will be put towards an irrigation system in our propagation tunnel while Mr. Ron Hesketh rounded up the troops repeatedly and, in conjunction with both Bunnings and Harvey Normans, helped fill the SBCG coffers compliments of numerous sausage sizzles.

And finally, there was the success in another very substantial grant, compliments of MP Karen Andrew’s Community Environmental Grant. The grant in conjunction with environmental eco-warriors, Worms Downunder, will allow the SBCG to purchase a ‘Double Grande Worm Habitat’ worm composter.

The addition of the Double Grande will allow the SBCG to process up to 40 litres of food and organic waste per day leaving in its wake ‘worm castings’, these being some of the most highly prized and nutrient rich, all natural fertiliser around. Access to such castings will be utilised as fertiliser for garden members and community members alike and will help to greatly reduce the vast amounts of biodegradable waste that unfortunately ends up producing harmful methane gasses in our already overflowing landfills.

The Double Grande Worm Composter is an exciting arrival to the SBCG and will be located beside the SBCG propagation tunnel.

Stay tuned for more posts regarding its pending arrival and other ongoing developments in the garden. And, again, for a complete run down of ALL of last year’s garden activities, go to our website and request a copy of the SBCG President’s Report be sent to you.

We hope to see you getting your hands dirty soon. 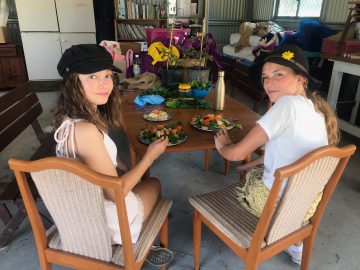 The Duke of Edinburgh Award-The Tradition Continues at the SBCG 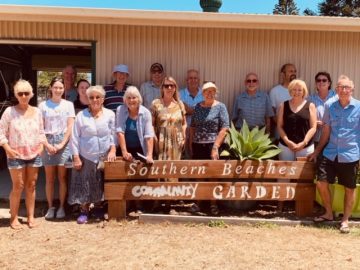