Wednesday night, the 8th of September would be a business network event to remember for everyone lucky enough to have been able to attend Tugun’s growing Southern Beaches Community Garden.

Under clear, late summer, evening skies, the SBCG and its members opened up the grounds of their community garden for something unique. An expertly planned and executed gathering of local business and council members and passionate, civic-minded gardeners.

Bendigo Bank’s Executive Assistant Maris Dirkx summed it up very succinctly in her following morning thank you email to the garden.

“The GC South Business Network event, proudly co-hosted by Southern Beaches Community Garden and Community Bank Tugun was a huge success last night with over 80 people enjoying the wonderful hospitality of the volunteers of SBCG.

Guests enjoyed a unique opportunity to mix and mingle under the stars with other local business and organisation representatives.

A BIG thank you to the volunteers of SBCG and their hard work to make the event such a success.”

In addition to what was expressed in her following day’s thank you email, Maris even went so far as to say the event raised the bar and the garden should be proud of itself as this was the first Business Networking Event staged at a venue that wasn’t licensed.

And in her short speech on the night, SBCG President Di Gunther was quick to give credit where credit was due. Namely, to the SBCG’s biggest sponsor Bendigo Bank and its Manager Allan Merlehan. As well as to Laura Gerber and Councillor Gail O’Neill for their ongoing support, so much of which has made the garden’s recent expansion project such a huge success.

Then she thanked the 200 plus garden members. Those who, day in and day out, do all the little things that add up to the garden’s ongoing success. Especially the members who cleaned, set up, unpacked, cooked, served, sang, picked up supplies, collected seedlings, prepared the market, served behind the bar, spoke, participated in the garden walks and took pictures.

Lastly, a special thanks went out to garden member Deb Power who not only led the night’s team of volunteers but also assumed the evening’s role of MC.

In short, it was a magical night.

The weather was beautiful, the garden looked spectacular, the Balter beer was cold, the food was delicious and the live music by Lauren from Youth Music Venture topped off the event.

Not surprisingly, the SBCG has been asked to host again next year. An invitation the SBCG was quick to accept. 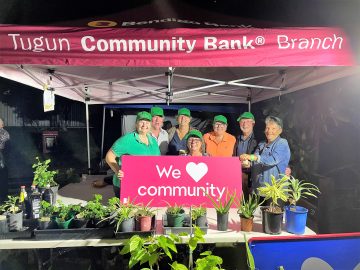 A Business Network Event to Remember 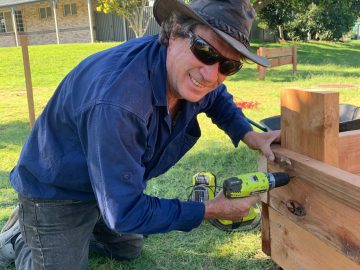 Tony Curtis — The Sky’s the Limit